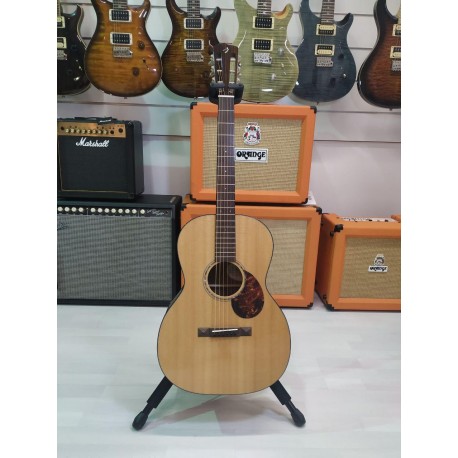 The essence of pre-war guitars shines through in the American Series Revival Model guitars.  This OOO has a twelve fret to the body design which attracts a variety of players who spend most of their time playing in the lower registers.  Solid Sitka Spruce has been hand selected for the top and gleaming Sapele makes up the back and sides.  The resulting sound is balanced with ample projection.  The attention to detail is clear as you look at the traditional appointments such as Herringbone top purfling and Ivoroid binding. Featuring a slim line Abalone rosette as well as a slotted headstock, the OOO/SSe has a Rosewood fingerboard with the Revival Dots pattern inlay.  This smaller scale guitar is a fantastic example of an instrument made for swift balanced flat picking and fast clear chording. Included is a L.R. Baggs Element Active VCT Pickup.